I recently stumbled on the following claim on the interwebs:

…that backlit displays can cause harm to the human eye whereas an electronic paper type of screen on a screenreader does not.

The user here was trying to upsell the idea that a screenreader with an e-ink screen is better suited for long haul reading than a tablet with an iridescent IPS panel—because of reflection, glare or yada yada ‘blue light’ radiation or something like that. As is usual on discussion forums, the thread led to plenty of heat on either side of the aisle with each group pressing for their case. Opinions like this (1) not looking at the source of light directly to (2) because blue light could hurt our eyes to (3) e-ink is almost like reading on paper and so on were thrown around a lot.

For a moment I thought if paper was so much better than a digital screen and if it has all these special magical qualities for the eyes then why aren’t people moving away from smartphones and tablets and going back to the way we used to read and write on paper? Line up textbooks in a cabinet made of teakwood! 🤯

As someone working on new book format for the web I had to find out. What were these people thinking and why they thought were upselling their favorite product with the qualities of physical paper? I put my search-ninja-hat on and ventured into the world of science to get some better answers and here are my findings:

To cut the long story short, none of the arguments in favor or against the benefits of an e-ink screen over an iridescent one are accurate or even close to being accurate. If you look at it through the lens of science both tablets and e-readers are equally great for reading books depending on when and where you pick it up for reading.

If your lifestyle is to sit on a beach under the Sun then you are probably better off with a e-ink screen. Such a screen relies on ambient light to reflect and reveal the text, so a well-lit room or daylight from outside helps. But if you read in your room everyday or at night on bed then an iridescent screen is better for your eyes.

As long as the contrast and flux of light is good enough for your eyes to discern the text, you will not be affected adversely by the underlying techonology in anyway. But if the ambient lighting is low, then there is a chance for you to be hurting your eyes more with a screenreader than a tablet. On a tablet you can ajust the brightness without worrying about ambience.

So now you might be thinking… but why does using a smartphone or an iPad all day feel tiring then? Does it really not matter if a surface was backlit or reflecting light from elsewhere?

To answer that let us look at the human eye closely: 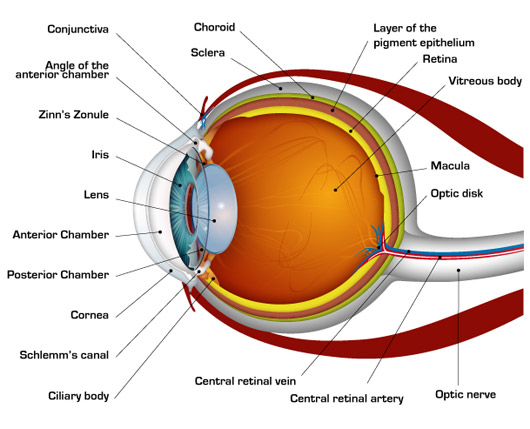 Human eye is a simple optical receptor. Light rays enter our eyes from one end, through a transparent cornea which are then focused on to the other end, the retinal photoreceptors on the back of our eye using a crystalline convex len in the middle. The iris and pupil take care of the incoming flux of light—the intensity—by expanding or shrinking and letting in only a safe amount of light for our photoreceptors to process. This is called exposure, like the one there is in a camera.

This is how a normal eye works. 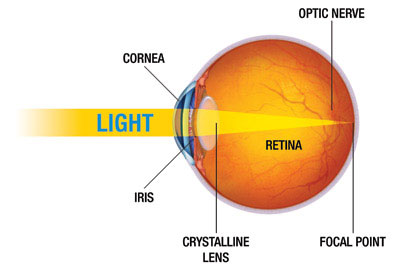 Unless we were forced to stare straight into the Sun for a considerable amount of time, our iris and photoreceptors are perfectly capable of handling the intensity of the visible part of the spectrum safely. Down to a single photon of light.

From the explanation above, it is clear that the process of collecting light rays through the lens and projecting those light rays onto a retinal surface on the back of the eye is a simple process and it follows the laws of classical physics. The simplicity of the mechanism, optical refraction, is also the reason why the human eye is called a simple type of eye for peripheral vision as opposed to say a compound eye of a dragonfly.

What matters to our simple eyes is only the intensity of incoming light. Too dim or too bright both are harmful for us.

This means that tha source of light has no bearing on how our eyes work. The light could be coming from a primary source like an incandescent bulb or an iridiscent screen of a phone or a secondary source like the surface of a wall or a painting or a page on the book that is reflecting light from another source. If you are looking at the wall, the wall is the source of light for you. Even though the rays may have originated elsewhere, even millions of miles away on the surface of the Sun.

Reflected or direct, light is light, it remains the same and the underlying phsyics of its nature doesn’t change. As long as the intensity (flux) is safe for our pupillary filters to pass, we can stare at the source as long as we wanted to.

That looking at the source of light directly or indirectly has no bearing on the eye. Only the intensity of light does. Reflected or radiated, the nature of light itself doesn’t change and nor does its effect on our eyes.

If it had mattered, we would have had reflector screens on market that were reflecting content off the iPad so that our eyes didn’t have to see at the source of light directly.

Another line of reasoning that people gave was that ‘the blue light could hurt our eyes…’. I found quite a few folks online saying this, as if this supposedly ‘blue light’ posed some kind of danger to the human beings in general. I mean this claim was so outrageous that a little research was required to set it straight.

Obviously the first question to ask here is what is blue light? What does the color blue of light have to do anything with being harmful? Well, we don’t know so let’s take a look at the full spectrum of light—the electromagnetic spectrum instead. Light rays are categorized according to the following eight letters of English: G X U V I M R P: 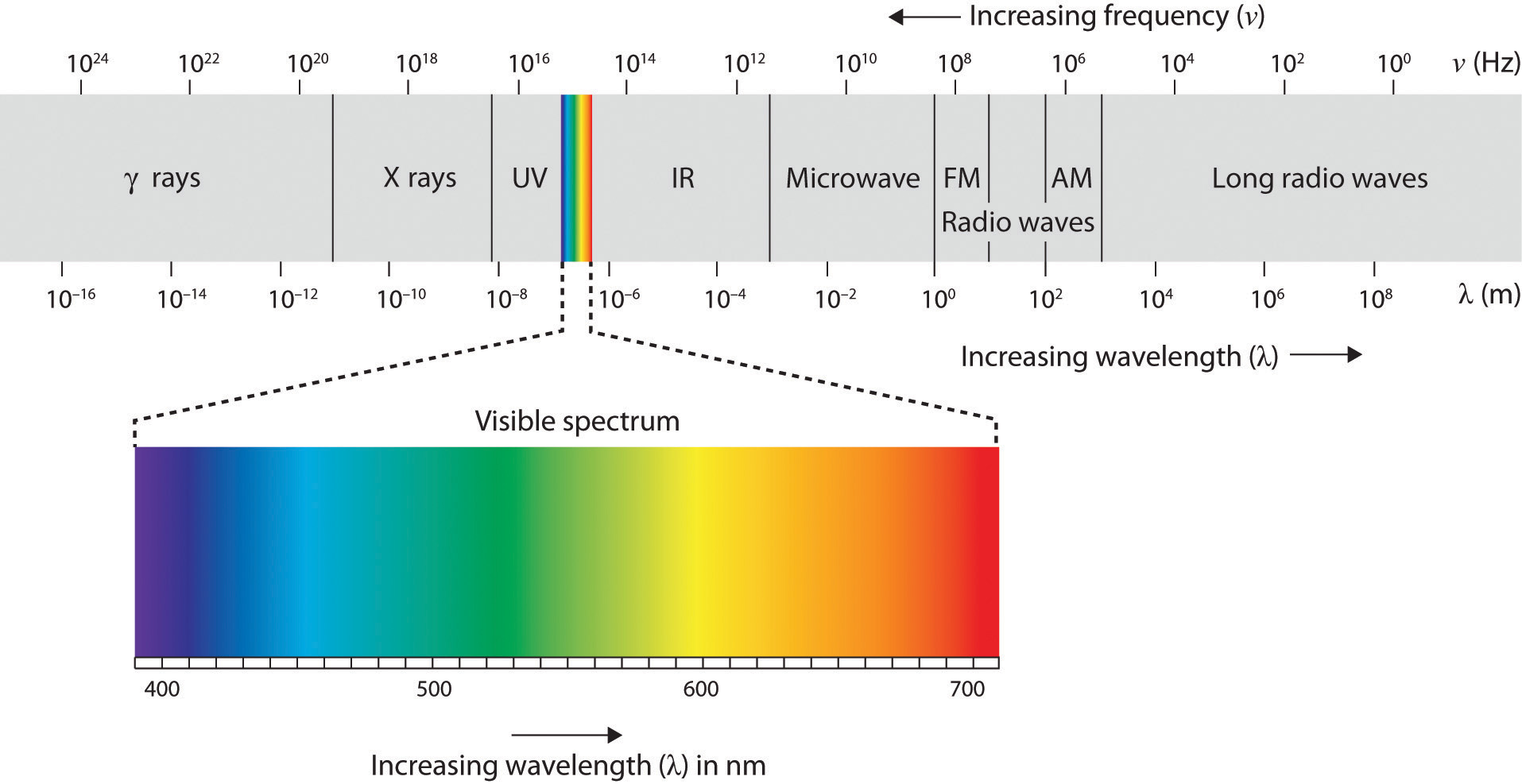 Assuming good faith we can take it that the ‘blue light’ as mentioned by the users online is the one represented by letter ‘b’ on the vibgyor, i.e the light range between 380 to 500 nm respectively. Does this bluelight pose any hazard to our eyes in anyway?

No, it doesn’t. In fact it is the other way round—bluelight is a healthy range for our eyes and it catches our attention.

Also, there is bluelight everywhere. It is a part of the visible spectrum and it usually is coming off of every object that we see–be it a tablet, a phone, a bulb, an LED TV or even the gas burner on the stove. Bluelight doesn’t affect our eyes in any way, in fact no color on the vibgyor has any effect on our eyes–this line of reasoning is just plain wrong.

Our retina functions much like a film on a camera. The retina is responsible for capturing all of the light rays coming through the eyeball, processing them into little light impulses through millions of tiny nerve endings, and then sending those light impulses over to brain through an optic nerve connected with over millions of nerve fibers. The brain then processes these impulses into our acuity called vision. It is literally our brains that see and not our eyes!

Each morning, when the day breaks, we wake up by slowly letting in a flood of daylight through our eyes. This is the time when our brain starts receiving a humongous amount of optical data or impulses from our eyes along with data from other sensory receptors like the auditory nerve and the touch sensors under the skin which had all been in a state of rest during sleep. The brain starts using a lot more energy to process the information and operates at a higher energy state during the day until it is time to go back to sleep again. In other words we operate at a higher state of consciousness during the day when we are awake.

Sunlight in the morning raises our attention level and forces our brain to process more data throughout the day until the Sun sets again in the evening prompting us to go back to sleep. It is just the way our body clock works, in a cyclical circadian rhythm.

This helps us to concentrate and focus on tasks during the day at work. 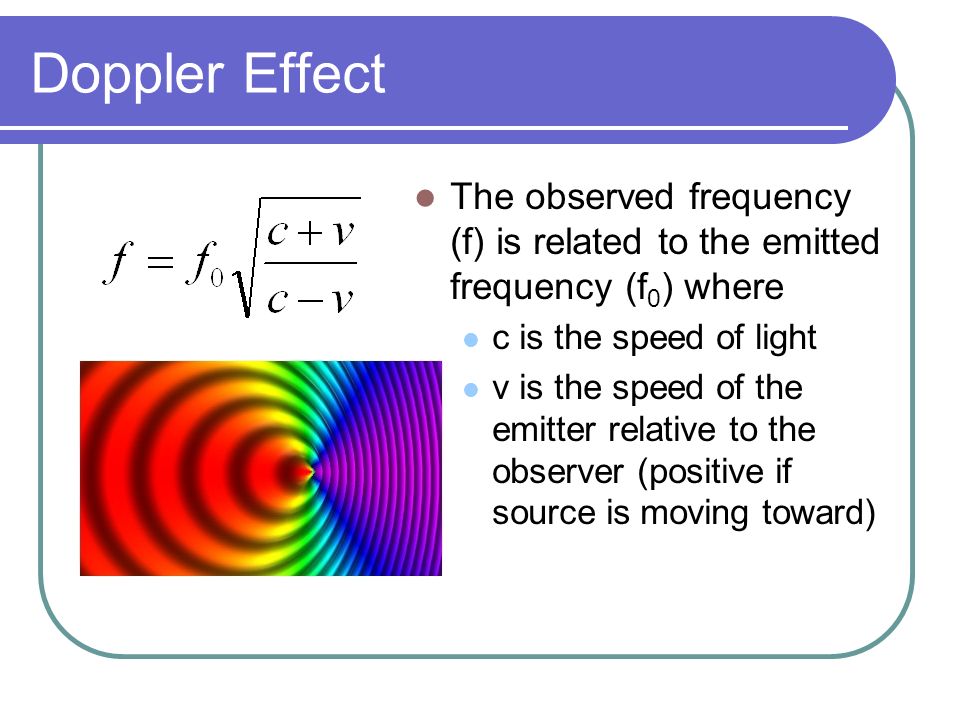 But at night when we continue to look at the screen closely, our brains think that it is still daytime because we continue to recieving the daylight spectrum from the mobile screen. This confuses our brain into thinking that the day isn’t over yet and we need to remain alert, even though the day was already tiring.

By not being able to discern when the day has officially ended, our brain literally offsets the circadian rhythym and can lead us to screen fatigue by the time we realize it is time to sleep. Let’s call this screen fatigue DEF or Daylight Energy Fatigue, for the lack of referenceable literature out there. Please correct me if this fatigue is already labeled differently elsewhere.

To tackle DEF there is now an option of turning red-shift on, on your smartphone and tablet, which can help signal the brain when the day is over. Apple calls this feature the Night Shift, which uses the warmer colors of the spectrum (representing evening) to prompt our sleep pattern. A continued usage of the device with red-shift on will not affect the circadian rhythm anymore and we can fall asleep normally afterwards.

It is easy to confuse this fatigue of daylight spectrum with eyestrain, which is a completely different subject that deals with conditions like pupillary muscle atrophy, milky lens or focal degradation or even retinal burn by staring at high intensity light source. These medical conditions may need separate treatments whereas DEF is merely a fatigue of the mind.

Chances are that if you are a night owl you might be better off with a tablet for your eyes. But if you prefer reading outside a screenreader or a physical book might be a better option. Other than that, if you are tired after your dayjob in front of the computer screen, do not pick up a book to read because your eyes, mind and body need some good rest.

Great. So now we can all go back to arguing what is better for each one of us with a little more understanding.

P.S.: It’s likely that some of you read this post on your desktop. I recommend the iPad. It’s the future.