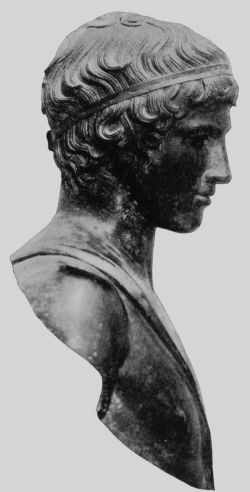 So much for the named sculptors of the period. We have several other works which obviously belong to the same date. The fine portrait bust of Pericles is, no doubt, a copy from the statue by Cresilas. I have said above that portraiture is rare in the fifth century. The extraordinary significance of Pericles in the art of the period is one reason for this exception. Moreover, it is, after all, scarcely a portrait in the Cromwellian sense, but rather an idealised type of the soldier statesman: so far from breaking, it notably illustrates the rule of idealism in the fifth century. It was said that all the portraits of Pericles represented him in a helmet to conceal his inordinately long head, which is a frequent subject of wit to Aristophanes. Typical of the period